Buy as a bundle and save! Everything Mitcz, all at once. 3 comedy specials, extra footage, rare material, 2 physical (optionally autographed) DVDs, 3 stickers, and a fancy t-shirt. You’re gonna fuckin’ overdose on Mitcz.

This is the DVD Deluxe Edition version which includes physical DVDs of Keepin’ It Evil and The Importance of Self-Loathing, a T-Shirt, 3 stickers, and digital videos of all 3 specials (download at checkout), plus instant digital download of all of the following extras : 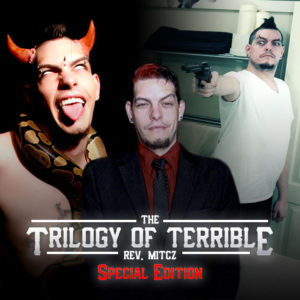