Rev. Mitcz : The Trilogy of Terrible

Three GREAT (-ish) comedy specials in one package. How lucky are you? C’mon… say “I’m lucky”. Make it weird for the people around you. This set includes Rev. Mitcz’s first comedy special Keepin’ It Evil, his unreleased EP follow-up I Want to Make Love to Your Face, and his most recent special The Importance of Self-Loathing.

Both Special Edition versions (DVD & Digital) include full versions of all 3 specials, plus : 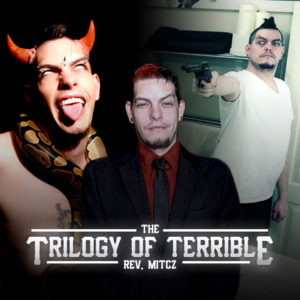